Posted by Kenneth Howard Smith at 2:22 PM No comments:

Posted by Kenneth Howard Smith at 2:13 PM No comments: 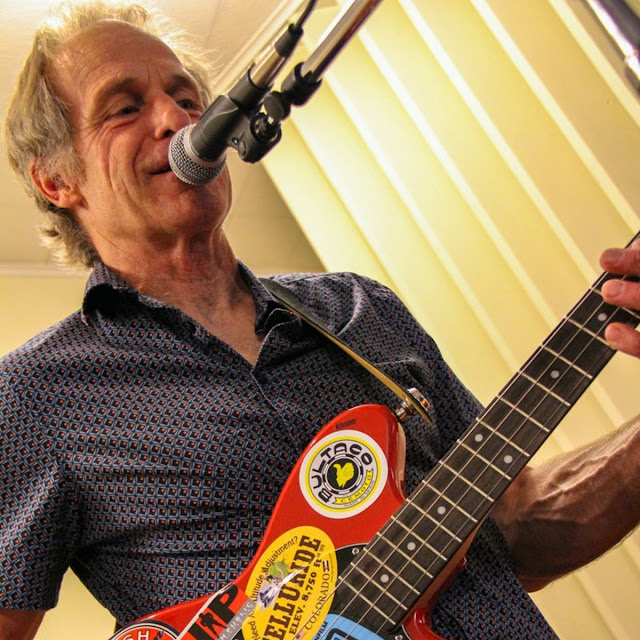 In addition to being a bassist, vocalist, lyricist, songwriter, comedian and good cook, Doug is an accomplished tambourine sharpener.

Doug is driven to create music that is quirky, fun, thought-provoking, and in some way inspiring.
He has been inspired by some of his favorite comedians and musicians: Jonathan Winters, George Carlin, Steve Martin, Robin Williams, the Talking Heads, Devo, Weird Al Yankovic, Warren Zevon and Frank Zappa.

Doug began his music career in 1982 with the Los Angeles band, Split Image and was signed to Allied Artists Records.

In 2012 his band Naked in Public opened for Cyndi Lauper at the Britt Festival in Oregon.
Most of his songs were recorded and produced by legendary producer Sylvia Massy (Red Hot Chile Peppers, Prince, Tom Petty, Johnny Cash).

His songs with his bands Naked in Public, Lucky Doug and the Stinkbugs and Lucky Doug Fergus can be found on Pandora, iTunes, Spotify, Apple Music and have been played on Sirius XM and hundreds of college radio stations across Canada and the US.

Doug loves puppy dogs, bubble baths, and long candle lit walks on the beach. He believes his role in life is to share his joy for living and his “If life hands you a lemon, make lemonade” outlook. Oh, and he’d like to thank Gosh.

From Jake at Roctober Magazine: “Odd quirk-rock truth telling through poppy songs that sound like weirdo novelty rock but are really life lessons that are actually funnier than real novelty rock.” 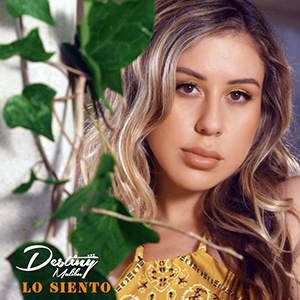 ‘Destiny Malibu, one of the year’s 25 break-out artists’ - Shutter16.com

Destiny Malibu’s "Lo Siento" is “hot like fire” and solidifies that undoubtedly Destiny can sing, rap, dance and write chart worthy songs in both English and Spanish.The rhythm immediately makes you want to move your hips and dance.

The beat keeps you engaged and ready to party. It’s a fun, happy song with a sultry rap that Destiny executes with exact precision. It’s the latin in her and she vibes it well. Her timing is impeccable. The production is fresh and full of natural sounds -there are even wooden spoons in the production! All the sounds blend perfectly with Destiny’s vocals.

Lo Siento is the second release and title song of her upcoming pop album scheduled for release in 2020. Destiny wrote the song about going out to a club just to have fun and not expecting to meet ‘the one’.

It’s a particularly special concept for her because it’s her first ever bilingual song and not only celebrates her being half Swedish on her dad’s side and half Latina on her mom’s side, but Destiny’s parents actually met dancing at the famous Avalon in Hollywood not expecting to meet ‘the one’.
Posted by Kenneth Howard Smith at 8:38 AM No comments:

Rachelle's Mystery Melons - Hope you got the Space - They get Large!!

Posted by Kenneth Howard Smith at 1:08 PM No comments: 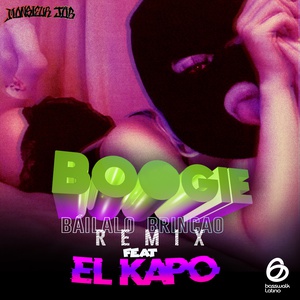 Toby Holguin dreams music, lives music and gives music life. It was Toby’s vision to create Monsieur Job, a band that will rock you make you move your feet. A band that will make you cry with passion. Formed by Toby Holguin from Cali, Colombia, a beautiful place high in the mountains above the clouds. Toby then asked Stan Kolev from Sofia, Bulgaria, Charlie Illera from Barranquilla, Colombia, and Leo Jaramillo from Bogota, Colombia to become one musically as Monsieur Job.

All of them live and breathe their own style of music combined they are Monsieur Job. Toby, Stan, and Charlie spin records as DJs constantly for different pools and venues around the world. Moreover, Toby had the idea to start doing Urban Music besides Chill Out and Electronic Music, which is the vision that created the album “Bass Passi”. They started dropping broken beats with a more festive, shaky, groovy Caribbean Latin flavor turning it into an international exclusive mash up of world talents and a unique blend of genres.

For their debut release, Chow Chow Eyyy Pow Pow, the record has hit the Euro Indie Music Chart at #1 for 9 consecutive weeks as well as progressive singles; “Kick it” Remix feat. Charly Black, “Pica Pica”, Niña Shake Your Body” feat. No Mercy & Vojke Djans and “Chilliando Hangueando” feat. Cholo reaching the #1 position as well, the Digital Radio Tracker Top 10, and Top 200 for Best Albums, #2 for the Billboard Latin Rhythm Albums Chart, and the Billboard Top 10 Heatseekers Albums Chart for their album “Bass Passi”. This album was recorded in Bogota and Miami at Basswalk Studios, Outta Limits Studios in Miami, and Barba Studios in Belgrade and mastered at Sterling Studios, New

http://monsieurjobofficial.com/
Posted by Kenneth Howard Smith at 2:45 PM No comments: