A native of South Carolina, 26-year old MaQuell “Que” Williams has always had a passion for singing. Beginning his singing and song writing career at a young age, Que developed his own brand and strives to produce material that has broad commercial appeal. His music not only entertains, it’s also relative to everyday life situations. 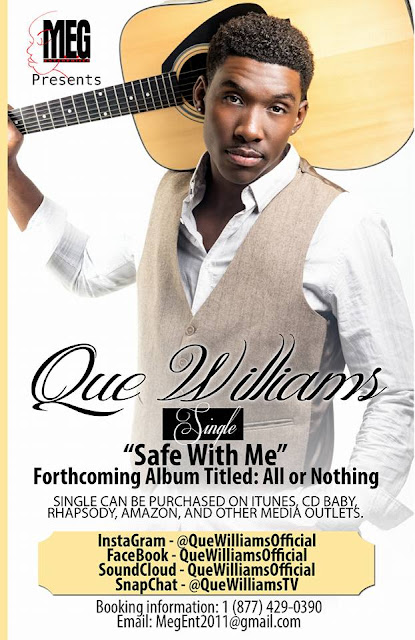 In 2015, Que moved to California to pursue his dream and is now working with MEG Enterprises on producing his new, self-written single “Safe with Me” and promoting it across the country, to be released in March 2016. Que is currently working with Darius Love for making of the new “Safe with Me” music video, which is set to be released in May 2016. Que is also the Ambassador for 2T Water and advertising for a Good Denim clothing line in California. He recently made an appearance at the 2016 All Star Basketball Game and took part in the annual Fuller Gordy’s Charity Bowling Event (Strike Fest) hosted by legendary, Berry Gordy.